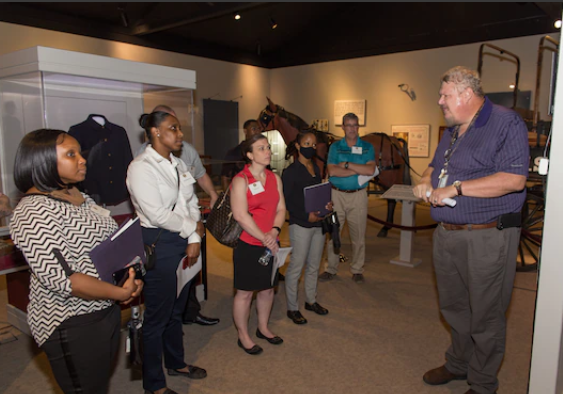 The Army Medical Department (AMEDD) Museum is the storehouse for thousands of historically significant artifacts that tell the story of Army medicine history from the Revolutionary War to today. These artifacts include various iterations of training devices used throughout time, artworks from the battlefields, portions of the first hospitals from the Revolutionary War, uniforms from historically significant women and men, medical evacuation vehicles, and more. Each one of these artifacts illustrate how learning from the past, and our successes and failures, can impact and change the future, and in the process, save countless lives.

The AMEDD Museum was built by the AMEDD Museum Foundation to be the permanent home for these artifacts because they were being stored in basements and dispersed in warehouses across the country. Today, having these artifacts in one place enables the museum to serve as an educational resource for new military medical trainees, medical personnel going through advanced training who are studying history and heritage, local San Antonio students who are interested in STEM and the arts, and as a community resource for groups like the Boy and Girl Scouts who utilize the museum for their projects. Hundreds of military heritage ceremonies are conducted annually at the museum, too, which encourages families and friends of service members to discover why Army medicine matters.

To put it simply, Army medicine is the story of humanity in war.

In 2021, the AMEDD Museum was able to highlight why people matter during the US Army Training and Doctrine’s People First Symposium. The People First symposium allowed the AMEDD Museum the unique opportunity to focus and highlight the exciting diversity of Army medicine history and the people who have saved countless lives through their efforts despite facing obstacles of sexism, racism, and other forms of discrimination.

The importance of these stories highlight the reasons why diversity is critical to making advances in any field of study, but especially medicine. By exploring the stories at the AMEDD Museum during these discussion groups, trainees were challenged to identify ways that they may contribute to discrimination and the many forms it can take in daily life.

One inspirational person is Dr. Alexander T. Augusta, the first African American to be commissioned as a medical officer in the Union Army. Born free in Virginia in 1825, Augusta aspired to be a doctor. Due to racial discrimination in the United States, however, he was forced to move to Canada to study medicine in the 1850s. After graduating from Trinity Medical College in Toronto, Canada, Augusta began working as a doctor. In 1863, Augusta wrote a letter to President Abraham Lincoln requesting to work as a doctor in the newly formed “colored regiments” during the American Civil War.

After working as the surgeon-in-charge at the Contraband Hospital in Washington DC, Augusta became the regimental surgeon for the 7th Infantry of the United States Colored Troops in Maryland. Even as Dr. Augusta wore the Union Army uniform with pride, he still faced racism in and out of the Army. In Maryland, several white surgeons disagreed with having a black man as their superior officer, sending a request to President Lincoln to move Dr. Augusta, who was reassigned to a recruiting station for black troops.

Dr. Augusta’s story is just one example of how the AMEDD Museum is able to challenge visitors and trainees with two questions, “How will you embody the Army’s core values as a medical and working professional?” and, “Why should you?” Visitors walk away with a deeper understanding of why the selflessness of those on the Medal of Honor wall continues to have a lasting impact today.

Donations to the AMEDD Museum Foundation go towards the preservation of artifacts and supporting the efforts of the museum in order to reach a broader audience and share the story and significance of Army medicine.

Thank you for your support!