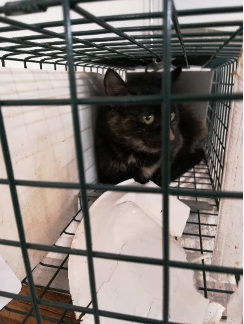 While working at an IAR Spay/Neuter clinic in early October, another volunteer, Heather, mentioned a situation at a business in downtown Durham where a mother cat and three kittens were living under some storage containers.
Volunteers Sarah and Rick contacted the staff at the Durham Distillery, and planned to visit the property and assess the situation.
It immediately became apparent that staff at the distillery were very caring individuals, and that they wanted to do the right thing for these feral felines that decided to make the distillery property their new home.
The first problem that we encountered, as pointed out by the staff, was that the immediate area around where the cats were hiding was infested with fire ants. This would make it very difficult to situate our traps where we would not put the cats in danger. Eventually we found a safe, level place to set up two traps. We tied the traps open so that they would not “spring”, and the staff moved their twice daily feedings nearer and nearer, and finally into, the traps over the coming days.
Trapping day arrived in mid-November. The hope was to trap the mother and the three kittens on Saturday evening so that they could be transported to the IAR spay/neuter clinic scheduled for the following day. It was a rainy evening in Durham, but, as they say, the show must go on. Sarah and Rick arrived at the distillery at 5:00PM with two more traps which we placed immediately adjacent to the two that had been used to train the cats over the prior two weeks. We placed paper plates containing a mix of sardines and dry cat food at the rear of each of the four traps, and engaged the latches to ready the traps.
After briefly stepping indoors, Sarah and Rick went back out to check the traps, all four of them had been sprung, and we had a cat in each one! An amazing result in less than 45 minutes. This can only be attributed to the training that the staff accomplished in the previous days. Sarah and Rick took the traps to the IAR clinic for their overnight stay, and participated in the clinic the following day for their surgeries. It turns out that all of the kittens were female, so any number of future litters have been eliminated. The cats remained at the clinic that night and the following night to recuperate from their surgeries. The cats were transferred from their traps to two large kennels for further socialization and recovery. The distillery staff hopes to domesticate all of the kittens and the mother cat for adoption. You may wonder where the “dad” to this small brood fits into the picture. As do we. The staff will keep an eye out for him to return to the property, and they will notify IAR so that we can repeat this exercise on his behalf.
IAR would like to thank everyone at Durham Distillery, especially the owners, Melissa and Lee, for giving us the opportunity to help out in this effort. Our last report indicated that the cats were eating out of Melissa’s hand. Truly amazing!!