Fighting Back Against Surveillance 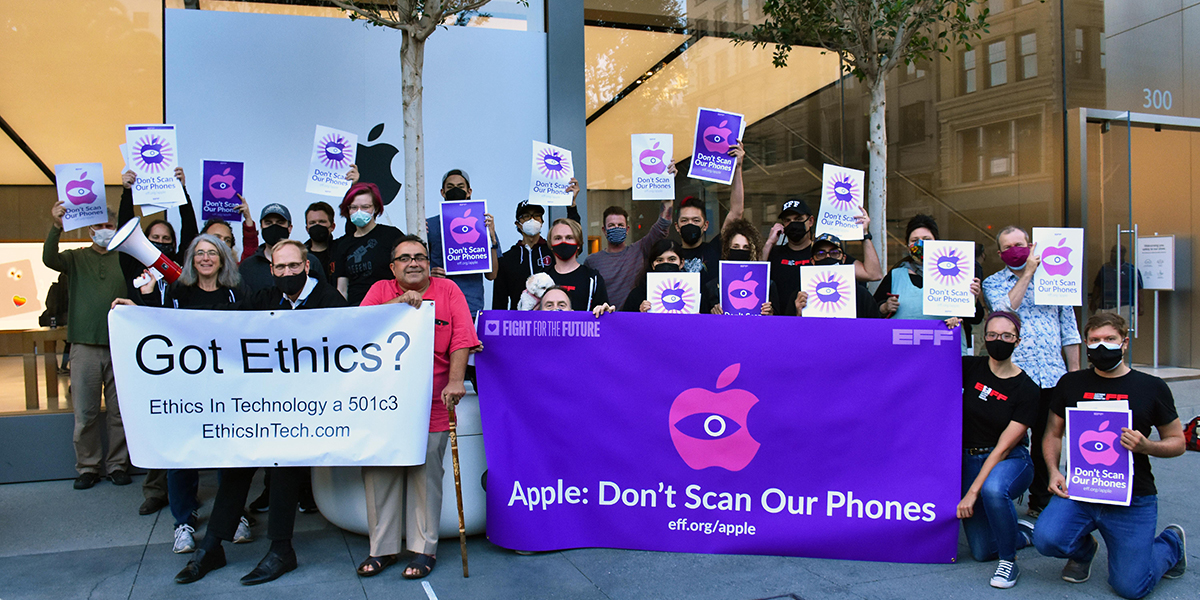 For over 30 years, the Electronic Frontier Foundation (EFF) has been the leading nonprofit on the frontlines of fighting for your digital rights, including free expression, privacy, security, and more.

You can boil EFF’s mission down to this: we want to ensure that users retain and gain rights rather than lose them as everyone’s use and reliance on technology grows. EFF’s work is only possible with support from people like you, donating to support the lawyers, activists, technologists, and others who fight these battles across the globe, in courts, in code, and on the streets.

As a huge advocate of end-to-end encryption, which ensures that the messages you send are only seen by you and the person you’re communicating with, EFF has publicly applauded Apple’s past stance on privacy and end-to-end encryption, especially when governments tried to force Apple to weaken security on their devices.

Apple’s history of privacy advocacy includes billboards that say “Privacy: That’s iPhone,” and pushing back on FBI requests for a method to break into encrypted phones. That’s why EFF was taken aback when in August of 2021, the company announced a plan to install photo and message scanning software in every device. Apple gave in to the pressure of government agencies asking for a way around their encryption. These proposed features would be a backdoor into our devices that governments worldwide could use as an excuse to expand surveillance and censorship, and they are the first steps towards ending truly secure messaging for Apple’s users.

Once EFF heard about this news, we knew that we had to jump into high gear. We launched a campaign on our Action Center, the hub for all of EFF’s activism campaigns, and gathered signatures from concerned users. On September 7, with the help of other civil society organizations, we delivered nearly 60,000 petitions straight to Apple’s headquarters. We also partnered with other digital civil liberties organizations and held protests in front of Apple stores in 11 major cities around the nation.

As a result of this activism, Apple has agreed to delay its surveillance plan, stating that they would take additional time to “collect input and make improvements.” EFF is glad that Apple is listening, but we want the company to commit and do the right thing: fully cancel its plan to install surveillance software on devices.

Without Apple’s clear commitment to canceling these features, EFF is continuing our activism. We flew a plane over Apple’s headquarters on the day of their annual iPhone event that said, “Apple: Don’t Scan Our Phones!” This plane gathered massive attention from users around the world. Our tactics are working, but we won’t stop until Apple abandons these plans completely.

That is where we are as of October 2021. EFF is committed to holding companies accountable for the promises they make to protect privacy and security. When companies stand with users, we stand with them. And when they undermine user privacy and security, we fight back. That is why we are pushing back so hard on Apple’s proposed features. Apple has found its way to making the right choice in the past, and we know that they can do it again for the good of millions of users around the world. We won’t stop until that choice is made.

New threats like this are happening every year. It’s essential that we keep up the fight and continue pushing back against plans to harm our digital rights. Without support from people like you, we couldn’t continue this crucial work. We deeply appreciate all of our supporters and friends who make this important work possible.