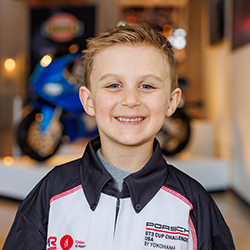 Built Ford Tough. That phrase may make you think of rugged pickup trucks, but it means so much more than that to the Bertram family of Trussville. On the 100th day of preschool, in January 2020, 4-year-old Ford Bertram joined his classmates in the tradition of dressing like an ‘old person.’ But Ford felt the part too with some lingering leg pain that caused him to limp.

That evening, the pain was so intense mom Amelia and dad Matt took Ford to the Emergency Department at Children’s of Alabama. An MRI showed a white spot that doctors believed was osteomyelitis – swelling or inflammation in the bone. Two weeks later, when the pain continued, Ford’s pediatrician referred the family to the lab at Children’s South. Amelia and Matt were stunned to learn that the bloodwork showed concern for leukemia. The family drove straight to Children’s main campus that afternoon. A bone marrow test confirmed the diagnosis of B-cell acute lymphoblastic leukemia (B-ALL). Ford had surgery followed by chemotherapy – his first treatment was on Valentine’s Day, Feb. 14, 2020.

Side effects from the chemotherapy kept Ford in the hospital a bit longer than initially expected. He developed multiple kidney stones and a pulmonary embolism that was miraculously discovered during a routine X-ray. He experienced extreme water retention, putting 40 pounds on his small frame in just two months.

As the weeks went on, from Ford’s room on 8QB, the family watched the ripple effect of the beginning of the COVID-19 pandemic. “We saw the streets below us that used to be filled with traffic go almost empty overnight,” Amelia recalled. Disinfecting wipes and hand sanitizer were in high demand by all, especially the Bertrams.

Once they were back home with Ford, Amelia and Matt had to be extra careful with well-meaning visitors. They were buoyed by the creative ways family members and friends showed their love and support.

“Ford loves to be around people, so we relied a lot on FaceTime for video calls,” Amelia said. From the safety of his window, he watched a joyful parade of cars topped by colorful inflatables driven by family and friends. “Without the pandemic, we wouldn’t have had such special moments like that. The blessing was that Ford didn’t have to feel like he was the only one having to isolate so he didn’t feel left out.”

As Ford approaches the last of his chemo treatments, Amelia said she is thankful for Ford’s Children’s care team that has rallied around the family. “You don’t feel like a patient when you’re at Children’s. The nurses on 8QB and in Clinic 8 have become family to us. The entire team is phenomenal. They’ve seen the best and worst with us, and they treat Ford like he’s theirs. If we didn’t have the support of everyone on 8QB and in Clinic 8, we wouldn’t have survived.”

One of Ford’s doctors, Kathryn Six, M.D., said, “Ford is always a bright spot in our clinic day, and he has maintained his cheery disposition throughout all of his side effects and complications. His parents welcomed his brother Shep as Ford was being readmitted for a complication and the family handled it with grace and were still so appreciative of Ford’s care.”

Amelia said Ford has inspired so many people throughout his childhood cancer journey and that the treatment has unexpectedly brought the family closer together. “It’s taught me to never take anything for granted.” She finds herself saying “yes” more often, “because you don’t know if you’ll be able to say yes a year from now.”

Ford is the second oldest of the Bertram siblings. Older brother Beau, younger sister River Grey and baby brother Shepherd are the best of friends. Ford is full of creativity and imagination. A self-described ‘master builder,’ you’ll often find him building elaborate Lego structures or crafting 3D designs with paper and tape.