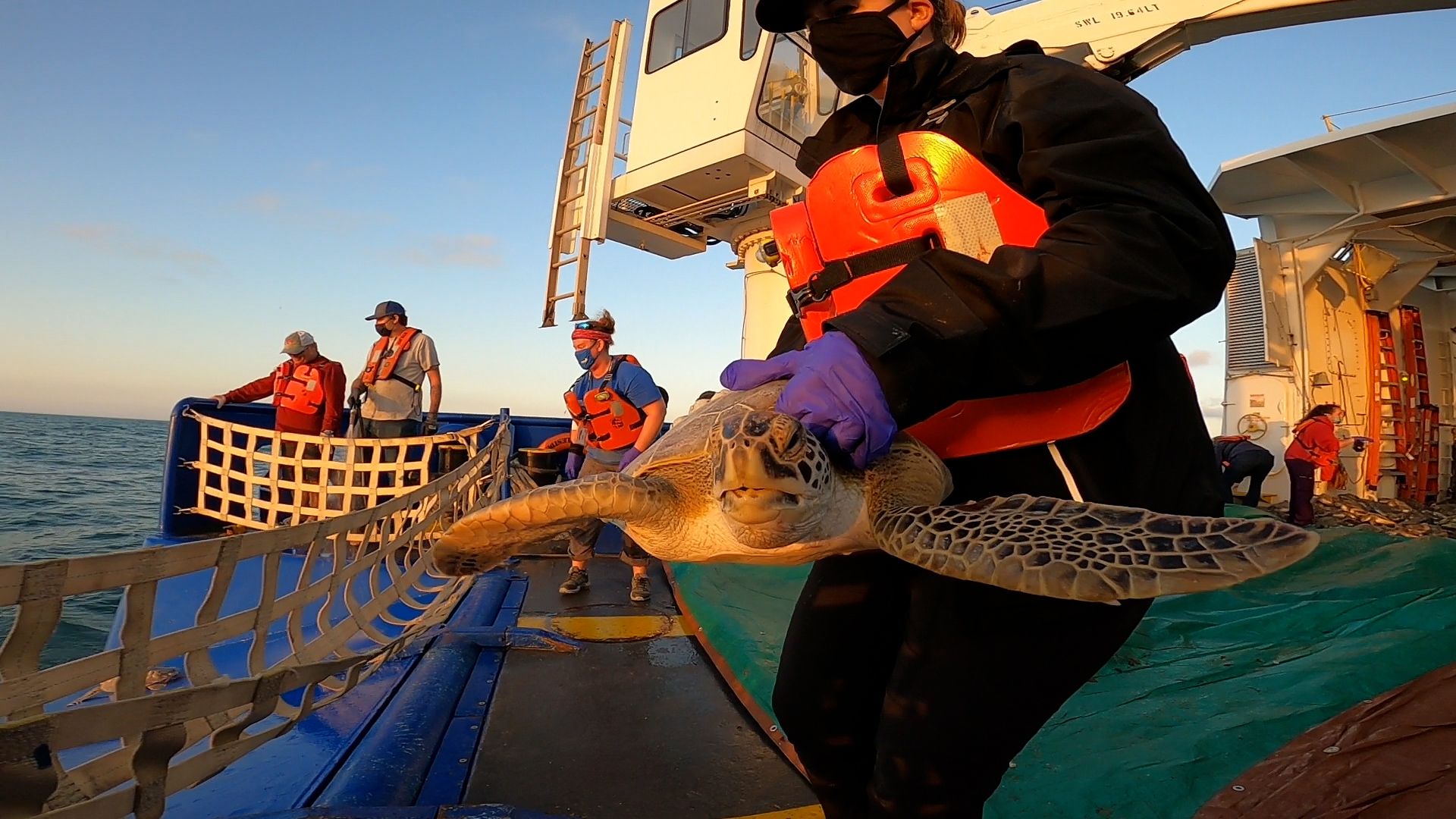 As unprecedented cold temperatures swept through Texas in early February, green sea turtles, afflicted by a hypothermic reaction called cold-stunning, were found by rescuers throughout the Laguna Madre. Our conservation partners at Padre Island National Seashore collaborated with the Texas State Aquarium and other partners to intake, document, and transport the cold-stunned turtles over at the Aquarium’s Rescue Center. Aquarium staff worked around the clock to receive, unload and care for truckloads full of cold-stunned sea turtles, and maintain the sea water systems that housed many of the impacted turtles.

Upon the sea turtle’s arrival, the Wildlife Rescue Team assessed their health conditions and promptly started treatment for cold-stunning. About 900 of these sea turtles were housed in the Rescue Center’s largest heated seawater pool, where they gradually recovered to a healthy body temperature. The rest were still not strong enough to swim but were still closely monitored. Thanks to the skill and dedication of the Aquarium team, the vast majority of the cold-stunned sea turtles made a full recovery and were soon ready to be released.

Plans were developed to release the turtles offshore because nearshore waters were still too cold. NOAA Fisheries, USFWS Southeast Region, and Texas Parks and Wildlife monitored, forecasted, and found water temperatures of at least 58 degrees Fahrenheit, giving the Aquarium the green light to proceed with the releases. Due to Covid-19 regulations and location logistics, the releases were not open to the public.

On Monday, February 22, the Texas State Aquarium released the first round of 146 of the largest sea turtles with the U.S. Coast Guard Sector / Air Station Corpus Christi and Texas Game Wardens’ help. Four small boats were used to transport the Sea Turtles offshore.

On Tuesday, February 23, a larger-scale operation took place to release the rest of the sea turtles. As soon as the MSRC (Marine Spill Response Corporation) heard there was a critical need to move fast to release the animals, they generously offered a large vessel, the Southern Responder which was able to transport over 800 sea turtles 20 miles offshore into the Gulf of Mexico. Gulf Copper also acted fast and donated the docking space. The Texas State Aquarium loaded five truckloads of rehabilitated sea turtles onto the vessel Southern Responder, and at around 6:30 p.m. Tuesday evening, with the sun setting on the horizon, the sea turtles were returned home.

“The number of organizations and individuals that came together to deal with this historical event and return the number of live animals back to the wild was truly remarkable. People in Texas put their best to move forward to help sea turtles, and it has been extraordinary to be a part of”. Dr. Brian Stacey from NOAA Fisheries.

“I am humbled by the outpouring of support from our community, organizations, our Aquarium and zoo friends, and from people all over the country. Hundreds and hundreds of people and institutions have pledged financial support to help us with this rescue effort,” said Texas State Aquarium President &amp; CEO Tom Schmid. “It has truly been an extraordinarily remarkable show of support.”

To learn more about the Texas State Aquarium’s Wildlife Rescue and Recovery Center and donate to the rescue and recovery of sea turtles, shorebirds, raptors, and marine mammals, go to texasstateaquarium.org/rescue.