Oscar- All He Needed Was a Second Chance 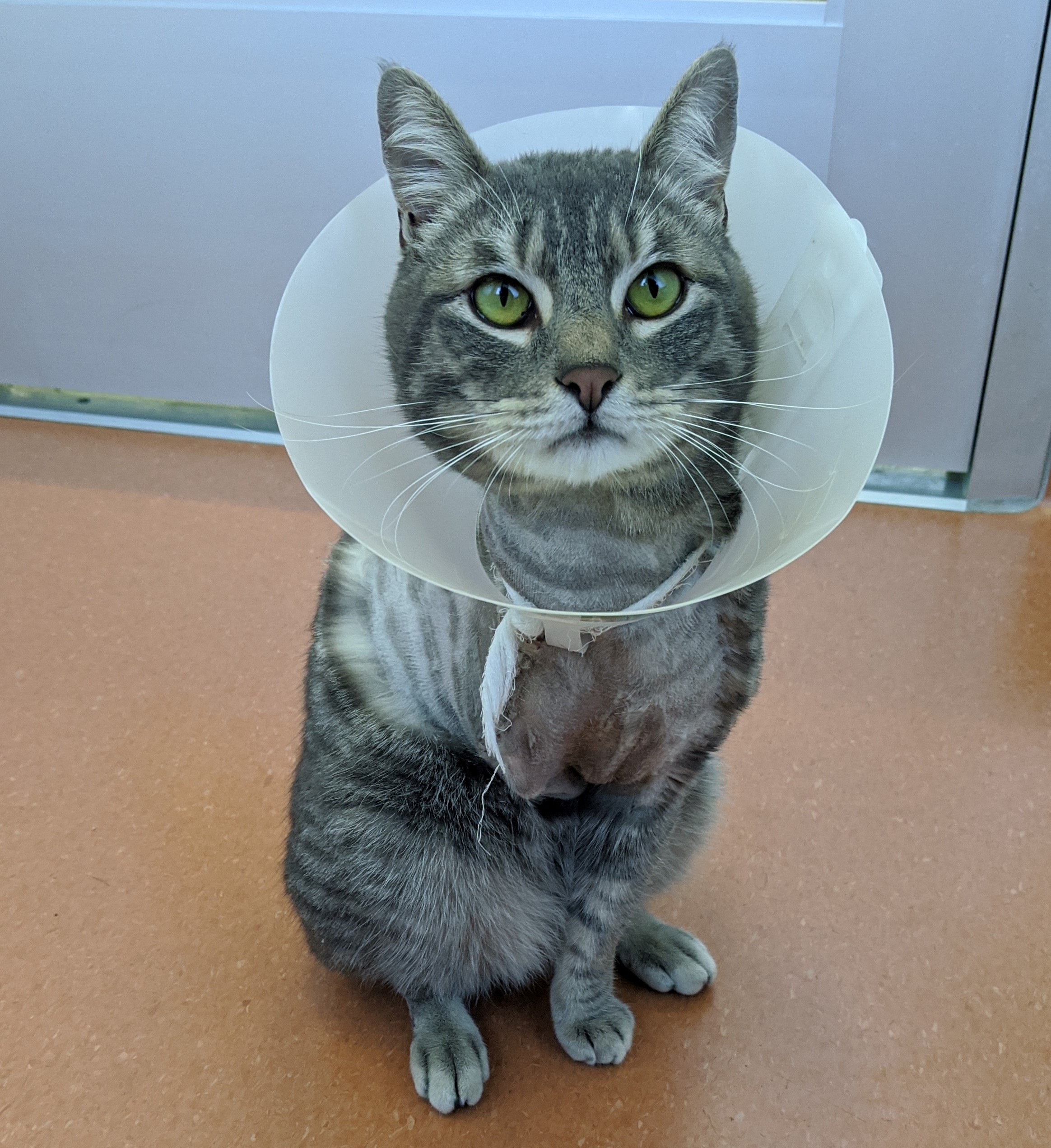 Oscar didn’t have much of a chance or a lot of hope as he limped along a street… until a good Samaritan found him, and they knew right away that his front right leg was in bad shape. He needed veterinary care and a home to call his own. As a stray cat, Oscar was brought to the Peninsula Humane Society & SPCA (PHS/SPCA) to receive medical treatment and to later find a home.

Oscar was diagnosed by veterinary staff with brachial plexus avulsion, an injury to the nerves and connective tissues. We don’t know how Oscar was injured, but these types of injuries are often caused by trauma where the leg becomes stuck and stretched as the cat tries to free itself. Our veterinarians knew amputation was his safest and best option to live a long and healthy life, so he was scheduled for surgery.

Oscar had a successful surgery! Following his procedure, Oscar needed time to recover which required extra care, so he spent a couple of weeks in the PHS/SPCA foster care program. Oscar had to wear a cone to keep from licking his surgery site and continue regular follow-ups with our veterinarians. Once Oscar’s medical needs were cared for, he was well on his way to becoming available for adoption.

When Oscar became available for adoption at our Tom and Annette Lantos Center for Compassion he still had to wear his cone, but that didn’t keep him from enthusiastically greeting and cuddling with staff and volunteers. Oscar wanted everyone to be his friend and would immediately lean in for pets and attention. Missing a leg didn’t keep Oscar from missing an opportunity. With the true spirit of a lap cat, he would try to climb into anyone’s lap, sitting or not.

Oscar’s easygoing, affectionate, and gentle personality won over his new family. It was no surprise to anyone that he was adopted one short week after he became available! Oscar’s family gave him a home, love, and a new name – Chance! His name was inspired by his story and the second chance he was given by PHS/SPCA to find his forever home. Chance spent 46 days receiving care through PHS/SPCA before finding his forever home.

Since his adoption, we received a few updates from his new family. Chance’s surgery site fully healed with no complications. He runs, plays, and jumps on three legs just as well as any cat on four legs! Chance doesn’t think he has any kind of limitation to doing anything he puts his mind to. Some of Chance’s favorite activities with his pawrents are stretching out on the couch together for a nap, playing with wand toys, and going for leash and harness walks in the garden.

Chance wouldn’t have gotten the second chance he needed without our Hope Program, which allowed him to get the surgery he needed and time to recover in our foster care program. The PHS/SPCA Hope Program helps the neediest animals in our care by providing extra medical care, behavior training, and extra TLC before they can be place into a new forever home. For some animals, PHS/SPCA is their only chance. Our Hope Program saves an average of 100 animals per month, and this life-saving work is only made possible through support from generous donors, like you!