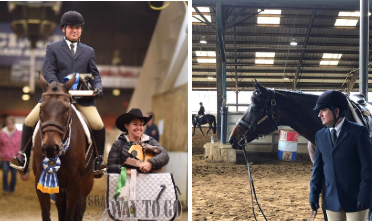 At TREE House of Greater St. Louis, we’ve seen amazing feats - children taking their first steps, veterans starting the healing process, and families finding solace and support in ways that they weren’t able to before entering our barn.

One such story is about Robert, who has a developmental cognitive disability. When he started riding with TREE House of Greater St. Louis at age five, his language skills were just about non-existent. Doctors told his family that he would likely be “low functioning” for the rest of his life, requiring constant care and supervision. His family was heartbroken. They pursued other support since traditional interventions were not working - and that’s when Robert slowly but surely began to show progress. As he bonded with horses throughout his childhood, the horse became his biggest motivator to stay focused long enough to learn to communicate.

By the age of 13, Robert joined the TREE House Competition Team and has flourished in the horse show environment ever since - gaining confidence, verbal and nonverbal communication skills, and independence. The foundation of horsemanship and the love of competition that originated with TREE House instructors is now being nurtured and advanced under the guidance of a special trainer. In addition to attending local shows, Robert travels to at least four national horse shows each year to compete in the Equestrians with Disabilities division. The determination to overcome the challenges of having a disability, together with the skills and values he has learned from caring for horses, has enabled Robert to acquire his own much loved horse, Empty Irons - and to join the workforce! He loves working at a local Italian restaurant - between his job and his horse, he has achieved the goal of all our clients: to take what they learn at the TREE House barn to the outside world.