A Safe Dormitory for Girls at a Kenyan School 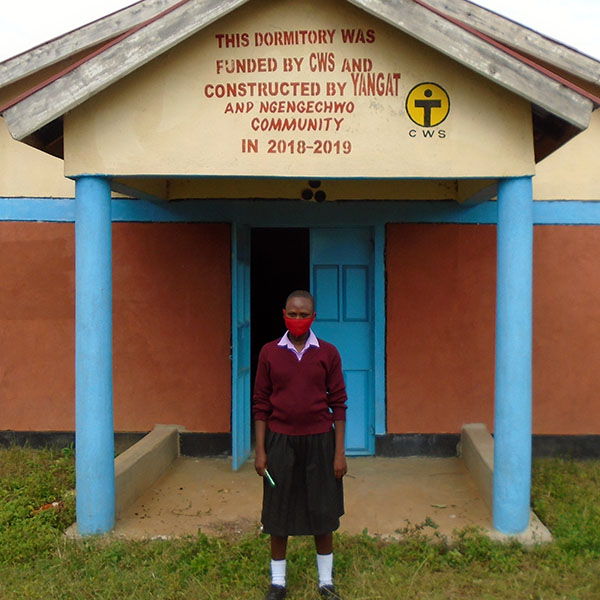 Delphine Chelimo is determined to learn. She’s a 14-year-old student at Ngengechwo Primary School in rural western Kenya. Because the school is far away from her house, Delphine is a boarding student. It allows her to focus on her studies and means that she doesn’t have to make a long, dangerous journey to and from school each day.

Delphine has been a boarding student since she was in Grade 5. At that time, though, there wasn’t a dormitory at the school. The girls who were boarding students would sleep on their classroom floors at night. But space was limited, so it was a logistical nightmare. They had to rearrange the classroom every morning and evening. They would take their bedding outside every morning and hang it over a fence. Each girl had a metal box to keep her personal items in, which were kept at the back of the classroom. But those boxes were hard to access during the day and were noisy and disruptive to get into. “The classrooms we used to sleep in were very congested and dusty. Having our personal items destroyed by others was the order of the day,” she remembers. The school didn’t have enough bathrooms, and the girls would go to a nearby river to bathe.

The worst part of the month was when a girl would get her period. “It was very difficult for us girls to open our boxes to pick out a sanitary towel for changing because the other students, especially the boys, would laugh at us when they noticed. Others would avoid you entirely because in our culture it is believed that when a girl is on her period, she should stay far away from others and should not touch anything commonly used by others,” she explains. Needless to say, it wasn’t a good situation. In fact, it was so hard that Delphine gave up boarding at one point, opting to live at home and make the long journey each day.

But today is a different story. Ngengechwo Primary School is now part of a CWS education program. Among other upgrades, it now has a dormitory building for girls. There is water on site as well as sanitary bathrooms that Delphine and the other students can use. In fact, Delphine is now one of 84 girls living in the new dormitory.

“I give thanks to CWS because on year [after I stopped boarding at the school] you came to the aid of the girls studying at Ngengechwo. You came to put up a big girls’ dormitory with enough space and washrooms as well as the latrines at the school boarding section,” Delphine says. “The environment changed to a very friendly one, enhancing our privacy, safety, health and performance.”

In fact, Delphine noted that a rare phenomenon is happening at Ngengechwo. “Since its construction, the girls’ population enrolled at the school for boarding has been constantly increasing and, contrary to the normal, has surpassed the boys’ population by far. Were it not for this facility, many of us girls would not be here today. Thank you very much to CWS.