A transformation you need to see to believe 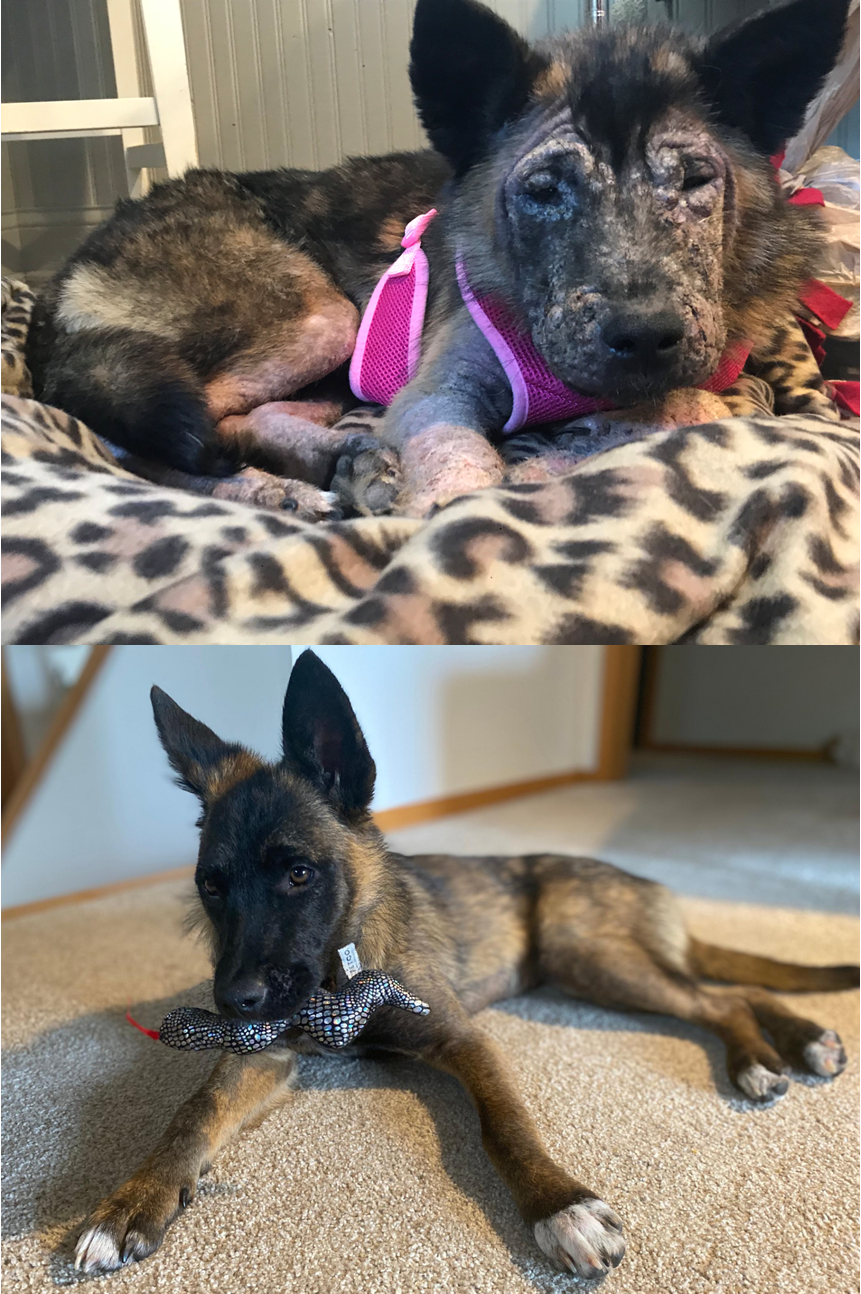 Jackie-O arrived at Ruff Start Rescue emaciated, with severe mange, secondary skin infections, open wounds, and eye infections. Before being rescued from the unforgiving environment and exposure she endured, her life and daily routine consisted of simply finding a way to survive each and every day.

“She was really sick and in really rough shape,” RSR foster Shawn LaBarre explained. “It was bad, and she wouldn’t have made it much longer out there on her own.”

“She was physically and mentally shut down when she arrived,” LaBarre said. “We knew this was going to be quite the healing process.”

Not knowing what to expect, LaBarre took Jackie-O to her home, followed Ruff Start’s instructions, giving her antibiotics, applied medicated cream, and bathed her one to two times a week.

Jackie-O likely had never even been inside a building, and they had no idea what her interaction with humans had, or hadn’t, been.

“It was scary for her the first time I brought her into the house,” LaBarre said. “I had to carry her in, and you could tell she didn’t know what to think.”

From that point, LaBarre said she had to actually teach Jackie-O how to come in and out of the house, and then how to navigate the stairs.
“She was really timid at first, but she responded very well to encouragement and affection,” LaBarre added.

When asked how she was so successful transforming Jackie-O, LaBarre said it’s actually quite simple; “First you earn their trust. You take it day-by-day, and you follow their lead, but you also guide. It’s amazing how quickly they learn to trust you, and they become comfortable with you in your home.”

LaBarre said Jackie-O, who is estimated to be just shy of one year old, arrived a very sick, shattered, and quiet dog, but she left a happy, playful puppy. She added that Jackie-O really enjoyed living in the house and being around people. Even when she had visitors, Jackie-O was always friendly towards them.

“Although one of her favorite things to do at my house was to sit out on the lawn chair in the backyard, I could tell by the time she left that Jackie-O wanted nothing to do with ever having to live outside again,” LaBarre concluded.

But, this wonderful story does not end here. Enter Jackie-O’s adopter, Chelsey Shoup.

Shoup and her boyfriend had been contemplating adopting a rescue dog for some time. They checked out RSR, and the organization really appealed to them, so they completed the paperwork and became qualified to adopt.

Despite Jackie-O’s initial appearance, Shoup said she was attracted to her immediately, so they applied for her.

“She was so sweet and loving when we met her,” Shoup said. “After we saw how well she did with our cats and with us, we knew we wanted her. So we adopted her.”

By the time Shoup adopted Jackie-O, about a month after she arrived, she was in much better condition but still needed routine medical attention, and she continued on a good diet plan to help her gain weight.

In addition to a complete lifestyle change, Jackie-O also went through a name change after being adopted. Jackie-O is now Tater Tot.

Shoup said she was thankful for all the love, attention, and training Tater Tot received at her foster home. Tater Tot arrived house-trained and very social. “She wasn’t even afraid of the vacuum cleaner,” Shoup added.

At the time of this writing, Shoup and her boyfriend have had Tater Tot for a few weeks, and they couldn’t be happier. They go on walks every day. They go to the dog park three-to-four times a week. They’ve taken her camping, and they’ve even taken Tater Tot with to a local dog-friendly brewpub. Shoup said as much as Tater Tot loves being out-and-about with them, around other people, and around other dogs, she also really likes her own fenced-in backyard.

To say Tater Tot is unrecognizable today, compared to the day she was brought to RSR, is, in this case, the most complimentary statement that can be made.

“She really is just the sweetest dog we could ever imagine having,” Shoup said.