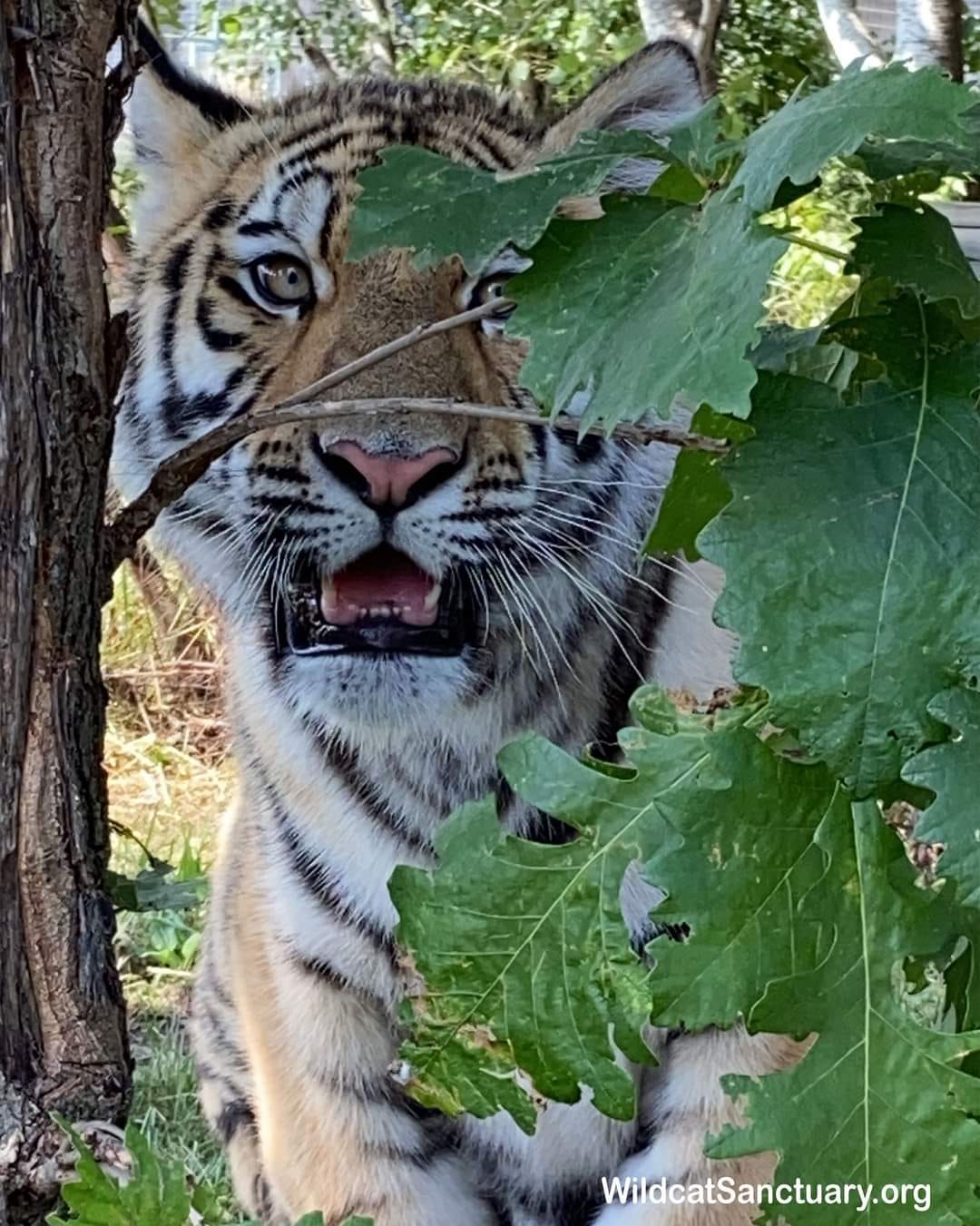 Newborn tiger cub Dash arrived at the sanctuary in November of 2020. His arrival was totally unexpected!

The Wildcat Sanctuary had been called upon by authorities to help four big cats in November 2020. They were located out-of-state and one of their caretakers had passed away. Though many other people were coming forward, trying to take the cats, sell them or send them to a pseudo-sanctuary for more breeding or display, we were so grateful to be there for them.

As soon as we arrived, we knew this wouldn’t be easy. A single lane, curvy dirt road through the woods, led up a quarter of a mile to the cages of these lions and tigers. We knew there was no way our transport trailer could make it up that hill. And with piles of scrap metal, cars and other collections lining the road, there was nowhere to turn around or come back down either.

The terrain was so rough that the tires on our transport crates bent and could not make it up the hill on their own. It was obvious, we had to come up with an alternative plan right away.

We had no other choice than to sedate these four big cats individually, put each of them into our vehicle, drive them down to the city road and load them into our trailer a quarter of a mile away.
This would all have to be done quickly, before the cats woke up. Not an ideal way, but the only way, given the circumstances.

Sadly, cubs had been bred at this location for years. They’d been sold on the internet, as well as for cub petting profit. Thankfully, the decision had been made to finally give these remaining cats sanctuary. Years of producing cubs, having them pulled away to be sold – this would be the end of that cycle.

Dash’s mother Winona had lived with her mate Marcus in this cage at the facility. We were told Winona had given birth only five months ago. Like so many others, that cub had been sold. You can imagine how shocked we were when, as we were loading cats, we discovered she had just given birth again!

In the wild, tigers have a litter approximately every two years. But in captivity, when breeders pull the cubs from their mother, their mother goes back into estrus. This means she can be bred several times a year.

We were devastated. This poor cub, we named Dash, still had his umbilical cord attached and weighed only a few pounds. If we’d had any idea, we would’ve postponed the pick-up for the health of Winona and her cub.

But as we discovered the cub, so did his father Marcus who Winona shared her cage with. He quickly tried to go after the cub. We were informed that he had killed offspring in the past. We had no choice but to continue the sedation and loading process to save all the cats, including the cub.

All were loaded safely, but Winona was understandably distraught from recently giving birth, defending her cub from Marcus, being sedated and loaded into her transport. It was not safe to put Dash back with her at this time. That was the most devastating of all.

Pay-to-play cubs are taken from their moms shortly after birth so they can be hand raised. As a sanctuary, we feel wholeheartedly that mother tigers should raise their young. So, when we knew this couldn’t happen based on Winona’s reaction, it hurt us to the core.

The only peace we feel is knowing Dash would not be sold and knowing Winona would never have to go through losing a cub ever again.

Though our sanctuary has raised many orphaned young wild cats, this was the first time we’d had to care for a newborn. Baby Dash received round-the-clock care, being fed every four hours by his human surrogate. Because of his delicate immune system at this stage, and with the threat of the COVID-19 virus looming, it was important Dash be cared for by just one caretaker.

Rescuing a newborn tiger cub like Dash is such an expensive commitment. It can cost as much as $10,000 every year to support just ONE big cat! He’ll live 20+ years as he grows into adulthood here at the sanctuary.

Learn more about our mission to provide a natural sanctuary to wild cats in need and inspire change to end the captive wildlife crisis on our website: https://www.wildcatsanctuary.org/resident/big-cats/dash/