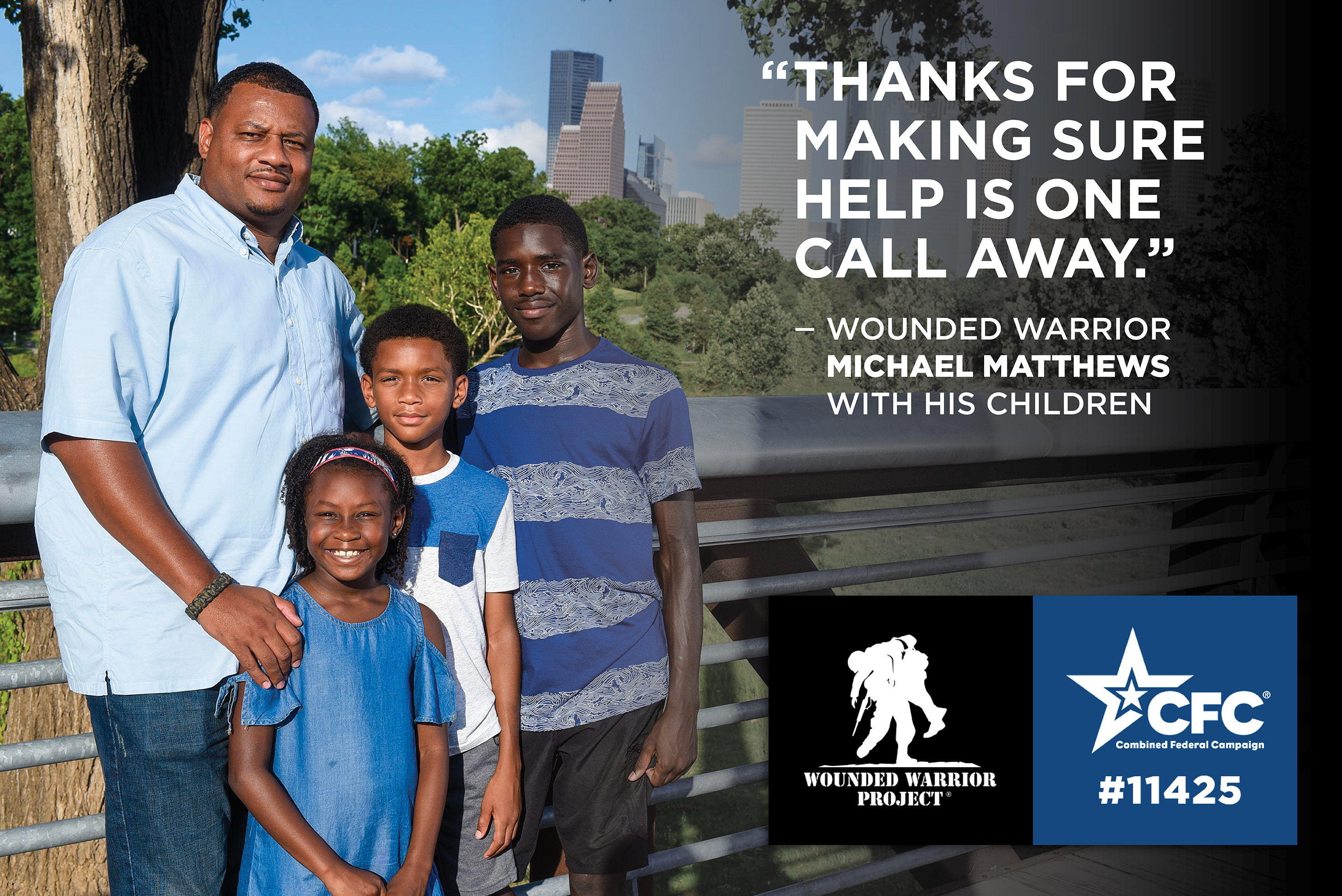 Wounded Warrior Project® (WWP) began in 2003 as a small, grassroots effort providing simple care and comfort items to the hospital bedsides of the first wounded service members returning home from the conflicts in Iraq and Afghanistan. As their post-service needs evolved, so have WWP’s programs and services.

Today, through direct programs in mental health, career counseling, and long-term rehabilitative care, along with advocacy efforts, WWP improves the lives of millions of warriors, like Michael Matthews, as well those of their families.

In 1999, Michael joined the U.S. Army infantry. He loved being in the service.
“There were a lot of fun times, especially being overseas,” says Michael.
“You get to travel and see the world in a different light than what you see on the
news. I really enjoyed it.”

But the events of 9/11 changed military life for Michael. The last of his three
deployments to the Middle East landed him in an active war zone in Iraq, where
enemy contact was a daily occurrence.

“Whether it was them shooting, just trying to scare us, or a full-fledged ambush — every time we left the compound we had some kind of contact,” he recalls.

Then one day Michael filled in for a gunner on a mission in Mosul. The last
things he remembers are the vehicle turning a corner, someone up ahead
radioing that they were under fire, and a loud bang. He woke up two weeks
later in a hospital in Germany. His jaw was broken and had been wired shut.
Severe burns on his back required multiple skin grafts. And he underwent
months of painful physical therapy to relearn how to walk and use the right
side of his body.

In addition to the physical injuries, Michael came home with a traumatic brain
injury (TBI) and post-traumatic stress disorder (PTSD). While he did not think
they were affecting his life; his wife saw it differently. He would not leave home
or talk to anyone other than his family. The previously happy, calm, and cool Michael
had become moody, angry, and aggressive. She urged him to get help, but it
was a fellow veteran he ran into at a gas station who finally got him to take the
first step and attend a WWP event.

Since then, he has become very active with WWP. Events like Soldier Ride® and
Project Odyssey® connected him with the kind of camaraderie he missed after leaving the
Army and inspired him to push himself.

“Seeing individuals who had lost limbs or who had been told they’d never be able to do this again — to see them have that breakthrough and say, ‘You know what? I can continue to do some of the
things that I enjoy and love.’ I really enjoy that,” says Michael.

The biggest help to him, however, is sharing his story and mentoring other
warriors.

“A lot of warriors feel like they are the only one going through something,” Michael says. “When we share our stories, they realize that there are others going through the same thing. They are not alone.”

Because WWP does not accept government funding, it is only through the passion and generosity of friends, supporters, and like-minded organizations that it is able to offer these life-changing programs and services to so many deserving warriors and their families — all at no cost.

Your donation can make a life-changing difference for warriors like Michael and their families and help advance the WWP vision of fostering the most successful, well-adjusted generation of wounded service members in our nation’s history.

Visit woundedwarriorproject.org today to learn more about its services and programs and how your Combined Federal Campaign (CFC) donation can make a difference.