The Fight to Save .ORG 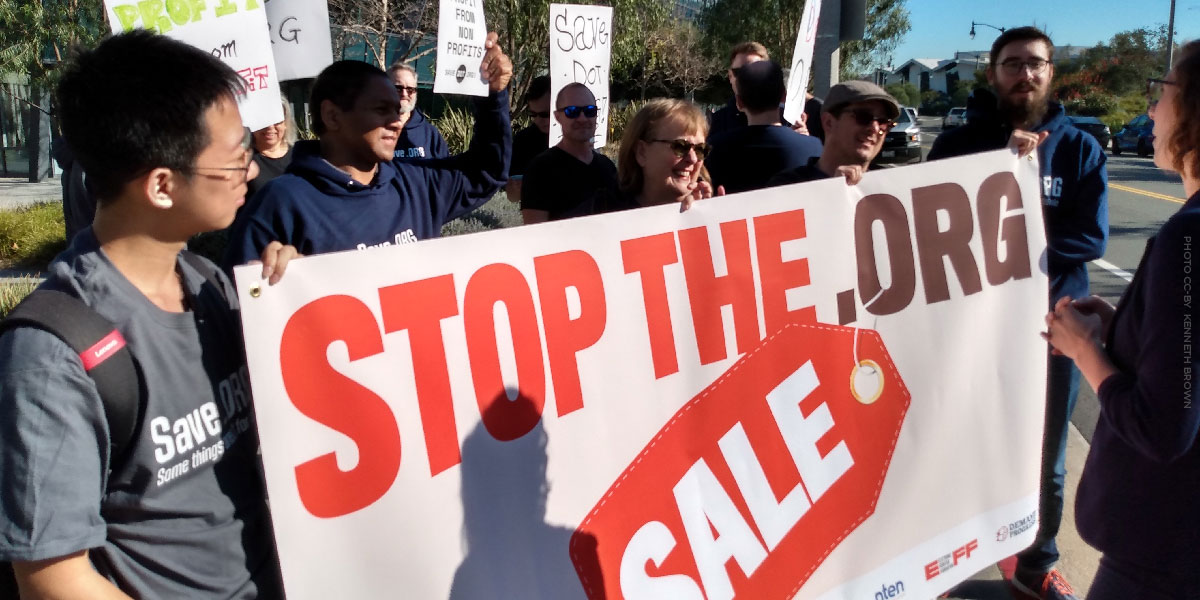 The Electronic Frontier Foundation (EFF) is a nonprofit organization that fights for your digital rights, including free speech, privacy, security, and more. You can boil down EFF's mission to this: we want to make sure that as our use and reliance on technology grows, users retain and gain rights, rather than losing them. EFF's work is only possible with support from people like you, donating to support the lawyers, activists, technologists, and others who fight these battles across the globe, in courts, in code, and on the streets.

EFF and countless nonprofits, NGOs, and civil society organizations worldwide now rely on the Internet to fight for a better future. In particular, they rely on their web and email presence to communicate with their supporters. Over the years, the .ORG domain has become the primary home for organizations like this. But at the end of 2019, the .ORG registry was under attack.

The .ORG registry is owned by Public Interest Registry (PIR), a nonprofit that, as a subsidiary of the Internet Society, has overseen the registry for almost 20 years. In late 2019, we learned that a private equity firm, known as Ethos Capital, had set out to acquire PIR for $1.1 Billion.

This deal made no sense to EFF and many others in the community. As EFF's Cara Gagliano put it, "Ethos is paying 1.1 Billion for PIR, which earned $101 million in income in 2018. You don't invest that kind of money without plans to boost profits." But boosting profits would likely come at a cost. Our fear was that nonprofits would be squeezed for more profit, with the threat of domain suspension to influence the political, social, religious, journalistic, or personal expression of .ORG registrants and their users at the request of corporations or governments.

EFF, NTEN, and the National Council of Nonprofits worked to bring together the voices of the nonprofit community against the sale. Organizations like the Girl Scouts of America, Consumer Reports, the YMCA, Demand Progress, OpenMedia, Fight for the Future, Wikimedia, Oxfam, Greenpeace, Consumer Reports, FarmAid, NPR, the American Red Cross, and dozens of other household names joined the fight. Within a few months, nearly 900 organizations and 64,000 individuals had signed on to a letter to the Internet Corporation for Assigned Names and Numbers (ICANN), which was tasked with approving the sale. Through countless blog posts, online events, and social media, EFF helped give the public tools and resources to speak out about the sale.

In a further effort to make our voices heard, EFF partnered with NTEN and other nonprofits, including Fight for the Future and Demand Progress, in a rally outside of ICANN's offices in Los Angeles. EFF and others spoke out about the dangers the sale would present to nonprofits worldwide, and hand-delivered the petition signed to the ICANN staff.

This demonstration and our vocal outreach paid off. Shortly after the rally, California's Attorney's General Office reached out to ICANN asking for in-depth information on the sale, which led to the sale being postponed for an extra two months.

A few months later, on May 1, ICANN rejected the sale of the .ORG domain registry. In a statement, ICANN said rejecting the deal was the right thing to do because Ethos Capital lacked a meaningful plan to protect the interests of nonprofits and NGOs that rely on the .ORG registry to exist on the Internet and connect with the people they serve.

EFF and many others were gratified by this success. We no longer had to worry about .ORG being, "controlled by domain name industry insiders and their secret investors," as EFF Senior Staff Attorney Mitch Stoltz puts it. Whether it be to keep government and corporations accountable, teach kids how to be leaders in their communities, or fight for digital rights, nonprofits and NGOs that use .ORG can now continue their work without the threat of censorship or corporate exploitation.

But new threats like this are happening every year. It's essential that we keep up the fight, and continue pushing back against plans to harm our digital rights. We deeply appreciate all of our supporters and friends who help make this important work possible.