FROM PATIENT TO PARAMEDIC: KONNER’S WISH TO SAVE LIVES AS A FIRST RESPONDER 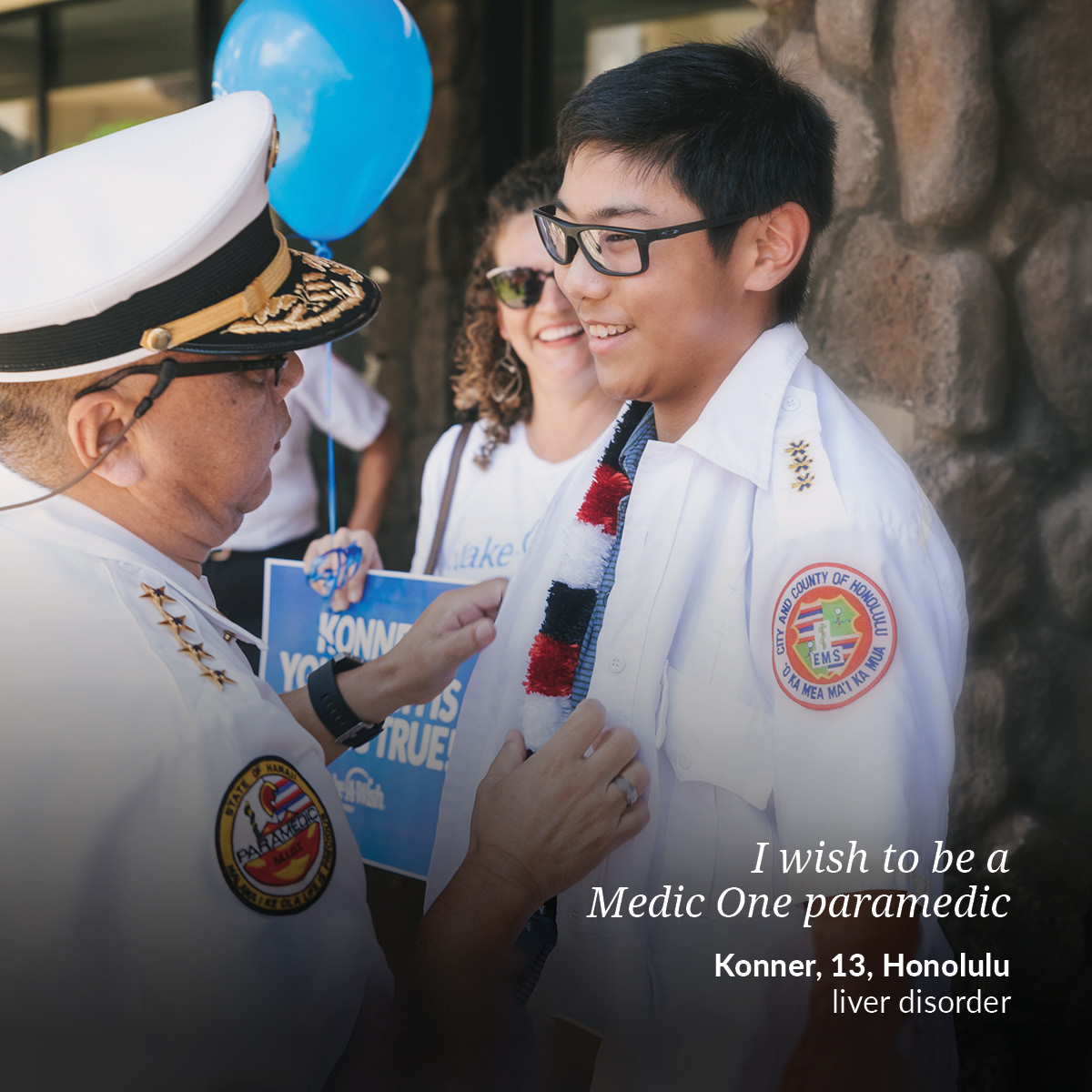 Thirteen-year-old Hawaii Kai wish kid Konner has wanted to be a paramedic since he was just 4 years old. Konner isn’t afraid of hospitals or tough medical situations; as someone with a rare liver condition, he has spent countless hours with medical professionals and is especially in awe of paramedics, whom he calls “the forgotten heroes.” “[Emergency responders] are deeply invested in the safety of themselves and the public they serve,” he explains. “They are constantly trying to improve public and community safety.”

EMS is present in many parts of Konner’s life, and having local paramedics for friends and family has only further fueled his passion for the profession. Although a few years away from officially being able to pursue his career, Konner’s bedroom at home is already outfitted to look like the workplace of his dreams—an ambulance.

Konner’s wish to be a paramedic with Medic One, Seattle Fire Department’s renowned emergency medical response unit, was revealed at ‘Iolani School, where he is a student. “The gathering of the student body just gave the event so much energy,” wish mom Heidi remembers. Although Heidi was keeping the big secret from her son before the reveal, the timing of the event during EMS week meant she was also in for a surprise. “When the heads of the Honolulu EMS Department and off-duty EMT and paramedics arrived… their show of support touched our hearts,” she said. In addition to meeting local paramedics, Konner was fitted into his own Honolulu EMS uniform and given a tour of an ambulance, complete with a rundown of the items essential to the crucial minutes between a call for help and medical attention at a hospital.

Konner and his family were extremely grateful to the Honolulu EMS team for their support in his wish reveal. Says Konner, “Thank you for helping with my wish presentation and always being supportive of my passion for joining your ranks someday.”

The location of Konner’s wish come true was also particularly meaningful. When he had been in need of a liver transplant the year prior, his cousin, a former ‘Iolani grad living in Tacoma, Washington, was the perfect match. In Seattle, Konner not only received the life-saving treatment he needed, but also became familiar with local EMS programs like Medic One. This time, Konner returned to Seattle full of excitement; instead of meeting with medical teams for treatment, he was joining their ranks for his wish, going out in the field as part of a team that helps save lives every day.

After suiting up, Konner worked an entire shift with Seattle firefighters and paramedics, receiving a full scope of what goes on in the life of a first responder. He rode along for less serious situations, what the EMS community calls “white cloud situations,” as well as “black cloud” situations that were more serious. Konner recalls that he “was constantly learning,” and was trained in life-saving practices with a manikin patient, performing CPR and intubation, which opens the airways and assists patients who cannot breathe on their own. EMS trainee Konner was also able to learn about how the greater EMS system operates, including the extensive certification and recertification process that ensures paramedics maintain their skills, and the physical and mental strength that goes into his dream career.

Konner and his family have nothing but thanks for the teams who helped coordinate what he calls “the best day ever.” “I eat, live and breathe EMS and talk non-stop about it- now I got to do hands on stuff. [The experience was] just awesome!” he remembers. “Thank you so much for letting me live my dream.”